Elon Musk has completed the $44 billion Twitter acquisition after months of legal wrangling, bad memes, and call-outs from both parties. Musk completed the purchase Thursday night, taking Twitter private, firing top executives, and providing little clarity about how he plans to achieve the lofty goals he has set for the influential social media platform.

Musk has earlier claimed to have “acquired” Twitter in a post to the social network reassuring advertisers that it will remain a safe place for their brands, amid fears that one of his first acts as CEO will be to restore Donald Trump’s account.

Before a tweet he published some hours ago – “the bird is freed,” – the Tesla and SpaceX CEO wrote in a statement attached to another tweet: “The reason I acquired Twitter is that it is important to the future of civilization to have a common digital town square, where a wide range of beliefs can be debated in a healthy manner, without resorting to violence.”

He added: “That is why I bought Twitter. I didn’t do it because it would be easy. Also, I didn’t do it to make more money. I did it to try to help humanity, whom I love.”

Musk posted the tweet a day after visiting the company’s headquarters in San Francisco and posting a video of himself entering the building with a sink, captioned “Entering Twitter HQ – let that sink in!” Musk also changed his Twitter handle to “Chief Twit” on Wednesday. 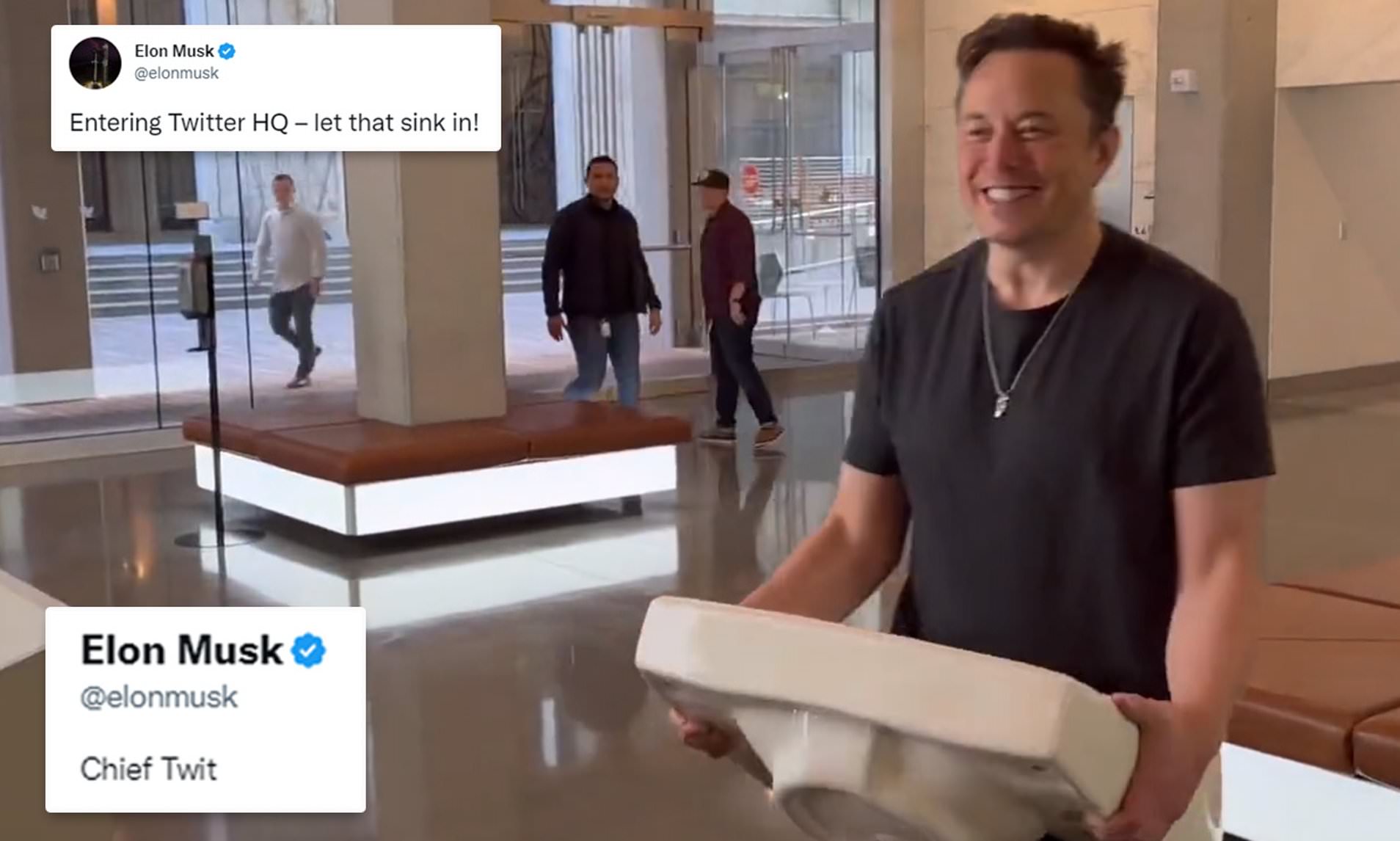 He also attempted to assuage employee fears of mass layoffs and reassured advertisers that his previous criticism of Twitter’s content moderation rules would not harm its appeal.

“Twitter obviously cannot become a free-for-all hellscape, where anything can be said with no consequences!” Musk stated this in an open letter to advertisers published on Thursday.

Musk has stated that he sees Twitter as a platform for developing a “super app” that will provide services ranging from money transfers to shopping and ride-hailing.

“The long-term potential for Twitter in my view is an order of magnitude greater than its current value,” Musk said on Tesla’s analyst call on Oct. 19.

However, Twitter is having difficulty engaging its most active users, who are critical to the company’s success. These “heavy tweeters” account for less than 10% of all monthly users but generate 90% of all tweets and half of all global revenue.

Musk also stated in May that he would lift the ban on Donald Trump, who was removed following the attack on the United States Capitol, though the former president has stated that he will not return to the platform. Instead, he has created his social media app, Truth Social.

Musk reportedly fired Twitter Chief Executive Parag Agrawal, CFO Ned Segal, Head of Legal, Policy, and Trust, Vijaya Gadde, and General Counsel Sean Edgett as one of his first tasks as the new owner of the social media giant. It’s also no surprise that Gadde was the first to drown. Musk previously accused the top policy executive of “left-wing bias” for her role in politically charged decision-making at the company, sparking a wave of racist hate and harassment her way.

The transaction is the high point of a tremendous debacle with a plethora of twists that cast doubt on Musk’s ability to complete the transaction. It all started on April 4, when Musk purchased a 9.2% stake in the company, making him the company’s largest shareholder.

The world’s richest person then agreed to join Twitter’s board of directors, only to back out at the last minute and offer to buy the company for $54.20 per share instead, an offer that Twitter was unsure whether to interpret as another of Musk’s cannabis jokes.

Musk’s offer was genuine, and the two parties reached an agreement at the price he suggested in just one weekend later in April. This occurred in the absence of Musk performing any due diligence on the company’s confidential information, as is customary in an acquisition.

Musk had second thoughts in the weeks that followed. He publicly stated that he believed Twitter’s spam accounts were significantly higher than Twitter’s estimate of less than 5% of its monetizable daily active users, as published in regulatory filings. His attorneys then accused Twitter of failing to respond to his requests for information on the subject.

Following the tussle, Musk informed Twitter on July 8 that he was terminating their agreement because Twitter misled him about the bots and refused to cooperate with him. Four days later, Twitter filed a lawsuit in Delaware, where the company is incorporated, to compel Musk to complete the transaction.

The Acquisition at Last

On Oct. 4, just before being deposed by Twitter’s lawyers ahead of the start of their trial later that month, Musk made another U-turn and offered to complete the deal as promised. He did so just one day before an Oct. 28 deadline set by a Delaware judge to avoid going to trial.

In a show of confidence in the company’s stock, its shares closed up 0.3% in New York trade on Thursday, at $53.86, a small discount to the $54.20 per share deal price. On Friday, the stock will be delisted from the New York Stock Exchange.